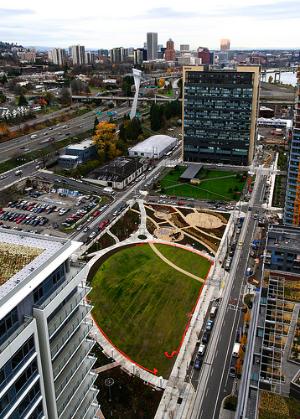 This morning's Daily Journal of Commerce highlights the Portland Housing Bureau's efforts to move forward on a long-planned veterans' housing project in the South Waterfront District. Reporter Nathalie Weinstein spoke with PHB Director Margaret Van Vliet about next steps for The Tamarack, a project planned for Block 49.

The South Waterfront District was meant to host hundreds of affordable housing units, but so far none have materialized. "I can't explain the past 11 years," before arriving as the new Portland Housing Bureau's first Director, Van Vliet told Sarah Mirk in this morning's Portland Mercury. "I am very intent on getting some affordable housing in that district."

Construction was set to begin on the Ankrom Moisan Associated Architects project in the summer of 2008, but a lack of private financing, thanks to the recession, has delayed the project.

While obtaining enough housing vouchers from the U.S. Department of Housing and Urban Development has been a challenge, the Housing Authority of Portland and PHB now have 105 vouchers and the Portland Veterans Administration has applied for 300 more.

Financing hurdles have proven more problematic. Director Van Vliet hopes to use $23 million in tax increment financing (TIF) available from the Central City Urban Renewal Area to close the gap, and to see construction begin this summer or early fall. "We're seeing a lot of homeless veterans coming back and struggling with housing and employment," Director Van Vliet told the DJC.

Director Van Vliet has been in touch with the League of Women Voters about this issue. See their letter to PHB and the Director's response.

Thanks to flickr user Thomas Le Ngo for the photo of South Waterfront.