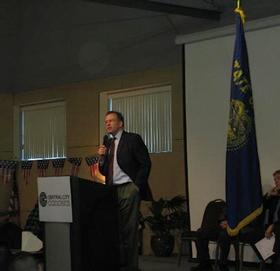 "On any given night in America, while we go to sleep in our homes there are hundreds of thousands of Americans who have fought for our freedom who go without their own home. Veterans make up 11 percent of America's adult population, but 26 percent of the homeless population." The Washington County Advisory quotes President Obama in March 2009: "Already, we are seeing homeless veterans from the wars in Iraq and Afghanistan. That's just not right. That's just not who we are as a country."

Almost one-quarter of the homeless nationwide are veterans, writes Julie Sullivan in the March 6 Oregonian. This morning, Nick will speak at the 2010 Veterans Stand Down & Job Fair. The annual event will be held at the Ambridge Event Center, across from the Oregon Convention Center.

The 2009 Stand Down drew more than 600 veterans and connected attendees with potential employers, service providers, and each other. The 2010 Stand Down is organized by Central City Concern's Employment Access Center, the Department of Veteran's Affairs,