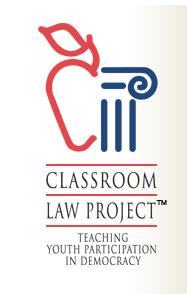 We The People, part of the Classroom Law Project, engages students of all ages in study of the institutions of American democracy, including the Bill of Rights and the U.S. Constitution. At the high school level, the program is called "Constitution Team."

The program culminates with the annual nationwide "We The People" competition. Nick was honored to judge Oregon's 2010 district competition this January. Six teams advanced to the state competition. Lincoln, winner at the state level, will represent Oregon at the national level this April.

Six Lincoln High School Constitution Team members have taken the program one step further, founding "Mission: Citizen," writes Kimberly Melton in the March 20 Oregonian. "They decided their training was just a preamble to the real world," she writes.

Last week, the program graduated its first participant when Laos native Chanhsouda Chanthakoun was naturalized as a U.S. citizen.

Said student Eugene Chung, "I think that the teaching is more rewarding than the learning."