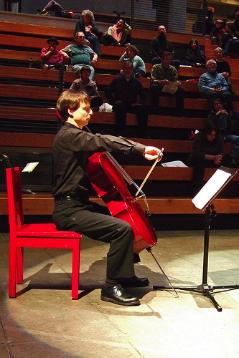 Nick was pleased to join staff and friends of the Community Music Center (CMC) yesterday afternoon as it celebrated 55 years of helping kids from across Portland learn how to play, appreciate, and understand music.

CMC, located in a 1912 firehouse at 3350 SE Francis, is a Portland Parks & Recreation facility funded by both public and private sources.

In 1955, under the leadership of Parks Director Dorothea Lensch, Parks began offering music lessons at the Knott Street Community Center. In 1960, CMC was founded - since then, over 10,000 people have received music education through scholarships, tuition subsidies, low-cost instrument rentals, and a music library. CMC now serves over 1,000 students of all ages each week.

Also at the celebration were County Commissioner Judy Shiprack, Musician and philanthropist Mary Tooze, Helen Korngold, Parks Director Zari Santner, and Gayle and Philip Neuman, who have taught at CMC for 30 years.

Congratulation to Director Gregory Dubay and his team at CMC on half a century of service to Portland music lovers of all ages!

Thanks to flickr user K. Kendall for the photo!