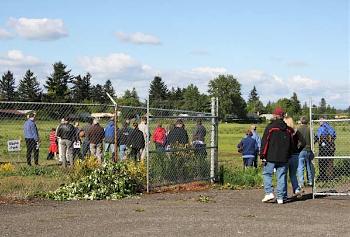 "Hidden deep in the Centennial Community association," writes David Ashton in East Portland News, "is a triangle-shaped public space called Parklane Park. There is a play area, a softball field, and picnic area - but that's about it."

Last March, Council unanimously accepted a Master Plan for the park. That Plan was developed by Parks staff working with a variety of partners, including the Centennial Community Association, the Centennial School District, Harold Oliver School, Parklane Church, and park neighbors.

Lack of funding, though, has stalled implementation of the Plan. At "Inside the Gates," attendees were treated to special tour of the park's 20 undeveloped acres. At that event, Parks

Director Zari Santner told the crowd, "the development of this park has the highest priority for us...whenever we get funding, we will make sure" that the project moves forward.

The Master Plan includes proposals for a community garden, an off-leash area, tennis courts, a skatepark, an outdoor pool, and a variety of open spaces for community events. Once completed, the former gravel pit will become East Portland's signature park.