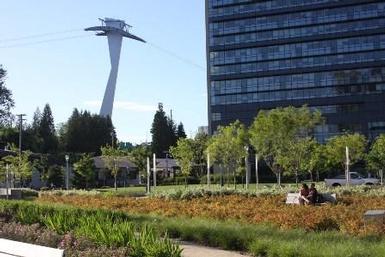 When she arrived in Portland and purchased a plot of land on the West side of the Willamette River in 1850, Elizabeth Caruthers became one of south Portland's first settlers.

The park features a community gathering area with movable table

and chairs, a bocce court, a quiet area with an historic marker honoring the site of Portland's first cabin, a bike rack, and more. The park will host an official opening celebration in August, but is already open to the public. Stop by this fun, family-friendly park next time you're out and about downtown!

More pictures in our Photo Gallery!