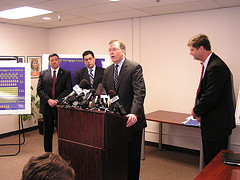 In a press conference this morning, US Attorney for the District of Oregon Dwight Holton announced a wave of new charges and convictions in Oregon, part of "Operation Stolen Dreams," a nationwide effort to investigate and prosecute mortgage fraud. Since March of this year, 39 individuals have been charged in 32 cases here in Oregon.

Nick also spoke at the press conference, which was attended by representatives of the FBI, IRS, US Department of Housing and Urban Development, Oregon Department of Justice, and Oregon State Division of Finance and Corporate Securities. 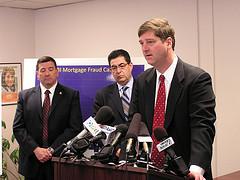 Communities of color are particularly at risk for foreclosure due to historic lack of access to mainstream banking and credit services and the high-cost loans they often hold. As Commissioner-in-Charge of the Portland Housing Bureau (PHB), Nick's top priorities are closing the minority homeownership gap and helping Portlanders remain in their homes.

Over the past year, PHB has invested more than $1 million in foreclosure prevention programs run by local non-profits. By working with culturally-specific groups like Hacienda CDC, the African American Alliance for Homeownership, and the Community Housing Resource Center, PHB is reaching the most vulnerable homeowners in our region. PHB also offers homeownership education and counseling, proven tools for preventing foreclosure.

Together with our partners at the local, state, and national level, we will continue to help Portlanders achieve their American Dream.

Bottom: Dwight Holton, US Attorney for the District of Oregon