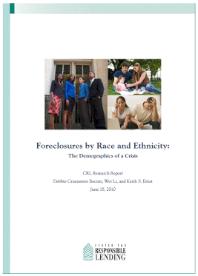 A recently released Center for Responsible Lending (CRL) study reports that an estimated 17% of Latino homeowners and 11% of African-American homeowners are at risk of losing their homes or have been foreclosed on already. The report predicts continued increases in foreclosure rates and home value decline.

An estimated 2.5 million homeowners experienced foreclosure between 2007 and 2009, the authors write, and another 5.7 million are on the way.

Their research also found that African-American and Latino homeowners were almost twice as likely to have lost their home as White homeowners.

In the past year, the Portland Housing Bureau (PHB) has invested nearly $1 million in proven foreclosure prevention strategies, working with local non-profit partners to help the most vulnerable homeowners in our community stay in their homes.

Click here for an executive summary of their study, or here for the full report.