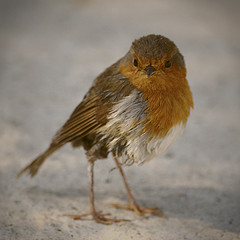 You might have noticed a new grouping of sculptures in the south end of downtown's Waterfront Park last week. Each of the five statues - up to six feet tall and 700 pounds apiece - depicts an extinct species of North American bird. The sculptures are part ofThe Lost Bird Project, artist Todd McGrain's memorial to five North American birds driven to extinction in modern times.

The sculptures will remain in Waterfront Park for the rest of the year, writes Carolina Hidalgo in the Oregonian, "with the aim of raising awareness of the dangers facing today's bird populations." The "State of the Bird: 2010 Report on Climate Change," released this Spring, reports that almost a third of our country's 800 bird species is threatened by extinction, including all 67 oceanic bird species.

This Saturday, the Audubon Society of Portland will partner with The Zoo, BARK, the Regional Arts and Culture Council, andPortland Parks & Recreation to present the West Coast launch of the project.

Beginning at 10:00, Waterfront Park will open for a day of free, fun, and family-friendly activities. You'll be able to meet Audubon's Education Birds - Hazel the Northern Spotted Owl, Ruby the Turkey Vulture, and Finnegan the Peregrine Falcon - dress like a Condor and learn what it means to be a scavenger, help paint a giant forest mural, and even make your very own birdfeeder to take home!

We hope to see you there!