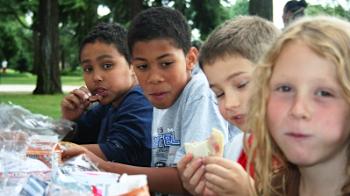 In this economy, more communities than ever before face the crisis of hunger. The state of Oregon consistently ranks in the top five nationally for hunger, and cities and towns across the state are facing unprecedented needs with shrinking resources. The Oregon Food Bank reports that during the 2008-09 fiscal year, more than 240,000 people ate meals from emergency food boxes each month, an increase of 20% from the previous year. Children are among the hardest hit by hunger, and are especially vulnerable during the summer months, when as few as 25% of students on free or reduced-price lunch have help finding healthy food options.

As Commissioner-in-Charge of Portland Parks & Recreation, Commissioner Fish has prioritized this community health issue. "Parks' motto is 'Healthy Parks, Healthy Portland'," he told reporter Jennifer Willis for a story in last month's Lund Report. "We're working hard to take that commitment to the next level," he said, by introducing the Healthy Portland Initiative, which puts a community health lens on Parks programs and services, with a major emphasis on healthy eating. A number of programs on several fronts are already underway. 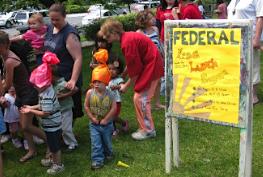 This summer, Parks is offering the Summer Playground Program at sites across Portland as part of the Summer Free for All. Beyond supervised recreation, these sites will provide free lunches to kids every weekday until the end of the summer. David Sarasohn reports that more than 250 kids showed up to Peninsula Park last week for fun, games, and free lunch.

To help address the growing need for healthy, locally-grown food, Commissioner Fish is leading a process to greatly expand Parks' Community Garden program. That initiative will add 1,000 new plots by 2012, helping more folks than ever before access opportunities to grow their own food.

David Sarasohn writes that last week the US House Education & Labor Committee opened hearings on the five-year reauthorization of federal child hunger programs. He quotes Secretary of Agriculture Tom Vilsack, who emphasized the importance of summer programs to combat hunger and called on the USDA to work with "local governments, nonprofit organizations and community groups...to encourage more schools, community centers and organizations to offer summer meals and for more days." Here in Portland, we are working to bring healthy lunches to any child who needs them, all summer.

By taking a close look at our parks system and thinking creatively, Nick and the Parks team are working to make the healthy choice the easy choice for Portlanders, during the summer and beyond.