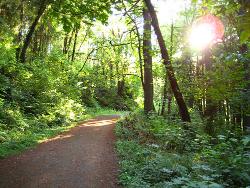 "Portlanders are rightly concerned about Forest Park," Nick said in a press release last month. The park faces a number of risks and there is significant work to be done to preserve the park's natural habitat and address the funding and recreation pressures noted in a recent City Club report.

In today's Oregonian, Anna Griffin calls Forest Park "easy to overlook, despite its prominent place in the city's skyline," and writes that it's "counterintuitive to think that the wild needs protecting."

And yet, it does. Recreational users, off-leash dogs, and invasive species all threaten the integrity of this 5,000-acre natural area John Charles Olmsted urged the City to purchase and preserve as a park in 1903.

- Finalize a Partnership Agreement with the Forest Park Conservancy

- Hire and assign a full-time Ranger to the park

Together, these initiatives form the basis of a long-term strategy to protect and preserve the park.