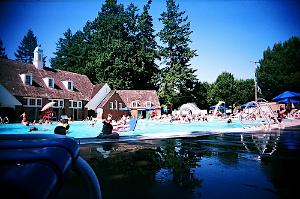 Join Nick next Tuesday afternoon at Sellwood Pool to celebrate the 100th birthday of Portland's oldest pool! Writes David Ashton in The Bee, "nothing says 'summer' like a dip in a cool pool on a hot summer's day. And, since 1910, the Sellwood Pool, now operated by Portland Parks & Recreation, has continuously operated to the delight of kids and adults."

The pool was constructed when the Jefferson Street public bath house, once a floating structure on the Willamette River, was closed because of increasing pollution. Sellwood Pool has been in continuous operation since its construction - quite an achievement!

The birthday celebration will feature free swimming, cake, face painting, games and prizes, and remarks from Commissioner Fish. We'll see you there.

Thanks to flickr user russelldavies for the great photo of Sellwood Pool!