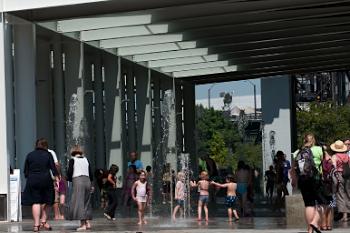 Commissioner Fish is honored to be part of "Echoes of Struggle and Hope: 20 Years of the Japanese American Historical Plaza" this Friday. The event celebrates the Oregon Nikkei Endowment's 20th anniversary with a rededication of the Historical Plaza in Tom McCall Waterfront Park. The Plaza, built with City funding, foundation contributions, and donations, asks us to remember the past and protect the Bill of Rights for future generations of Americans.

The celebration will also feature a special poetry collaboration from Street Roots, Transition Projects, Inc., Portland-area students, and Sisters of the Road.

Following the rededication, join the party at the Bill Naito Legacy Fountain, just a few steps away. The Fountain opened last August with remarks from Commissioner Fish, poetry, a blessing from the confederated Tribes of Grane Ronde, and a performance from Portland Taiko. Entertainment at this Friday's party will include Portland Taiko, the Minidoka Swing Band, and The Slants. Bring your friends and family to enjoy crafts, food, and beer at this award-winning landmark.

Above: The Bill Naito Legacy Fountain opened last summer to an enthusiastic crowd of youngsters