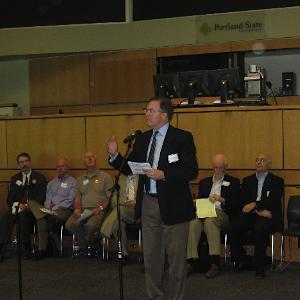 In 1990, Democrats and Republicans came together to pass the ADA. President Bush, at the largest signing ceremony in American history, called the ADA an historic "declaration of equality."

Nick spoke at the event and brought with him a very special piece of history: one of the pens that the President used to sign the ADA. President Bush gave the pen to Nick's father, Congressman Hamilton Fish, Jr., in recognition of his key role in the passage of this historic legislation.

Nick is committed to working with his bureaus to ensure full and equal access for all members of our community. Portland Parks & Recreation offers the Adaptive and Inclusive Recreation Program, which provides community-based recreation activities specially designed for people with disabilities or special needs. AIR services help people in our community enhance their health, well-being, and independence.

Without the ADA, 50 million Americans would still be facing barriers to equality and full participation in society today. Nick was proud to be part of the 20th anniversary celebration. Special thanks to event organizers Commissioner Amanda Fritz, Nickole Cheron, and Michael Levine.