Join us this Thursday to kick off of the 2010 Washington Park Summer Festival! Our opening night performance features an exciting lineup of international drumming, featuring Japanese and Brazilian music and choreography from Portland Taiko and The Lions of Batucada. 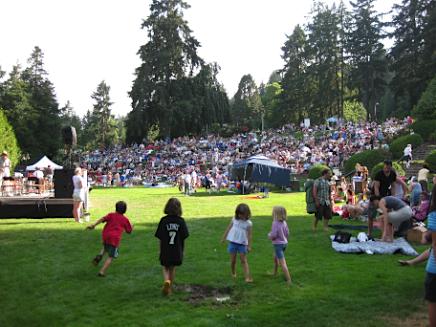 In 1949, Dorothea Lensch, Recreation Director for Portland Parks & Recreation, established the Washington Park Summer Festival, a series of free concerts open to the public. The Festival ran - in various forms - through 1988, when budget restrictions put it on hold. It wasn't until 2005, when Daimler (formerly Freightliner LLC) stepped up as Presenting Sponsor, that the Festival returned.

Last year, Parks was unable to find a presenting sponsor for the Festival. Faced with the possibility that the Portland tradition would once again be put on hold, a group of community donors, led by Gordon Sondland and Katy Durant, stepped up to donate the $100,000 needed to put on the Festival. Donors from across the region contributed more than enough to save the Festival.

This year, we are proud to welcome back Daimler Trucks North America as presenting sponsor of the Festival. "We believe it is important to support the communities in which we operate and are proud of the enjoyment the Festival brings to the many people who attend - many of which are our own employees," says Dave Wiederrich, of Daimler. Also supporting the Festival this year are the Mark Spencer Hotel, Safeway, Wells Fargo, US Bank, Key Bank, Kaiser Permanente, Portland Trail Blazers, and Star Park/Schlesinger Company.

The Festival is part of Parks' Summer Free for All program, which offers free movies, concerts, and recreation activities all summer long across Portland. The Washington Park Summer Festival will run each night through next Saturday, August 14. The Festival schedule features jazz, blues, Beatles night, drumming, opera, and more - there's something for everyone! Shows begin at 6:00 pm. Bring your own picnic or enjoy food from some great local vendors. The Washington Park Amphitheater is easily accessible by TriMet's #63 bus, or the MAX Blue Line, which connects to a Rose Garden Shuttle at the Oregon Zoo station.