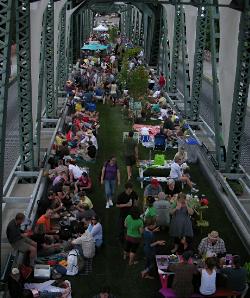 It was another eventful weekend for Commissioner Fish. Friday morning, he met with several members of the leadership team at OMSI for a discussion about OMSI's vision for the future and a tour of the OMSI campus. Later that day he toured Forest Park with Parks Bureau staff, visiting some less-traveled areas of the park and looking at some of the areas that are part of the conversation around increasing access for mountain bikers. 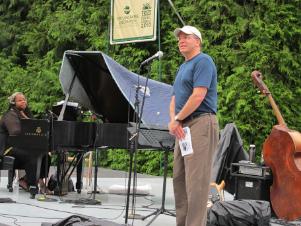 Saturday began with Brunch on the Bridge, the last of more than 60 events that made up the inaugural Portland Bridge Festival. He was very proud to officially open the park and dedicate it to Tony Lester, who worked for more than 20 years to keep our Willamette River bridges safe and accessible before announcing his retirement this June. The "Tony Lester Temporary Greenway" was enjoyed by more than 1,000 picnickers, who enjoyed food cart fare and the first-of-its-kind experience of walking in a park on the Hawthorne Bridge with no shoes on!

The Washington Park Summer Festival welcomed a group of unforgettable musicians for "Jazz Women" night. The lineup included Janice Scroggins, Ward Griffiths, Leah Hinchcliff, The Quadraphonnes, and more. The Festival continues through this Saturday, so you still have plenty of chances to enjoy an evening in one of Portland's most spectacular venues.

On Sunday, Nick led the Providence Bridge Pedal's first annual Kids Pedal on a 3-mile route across the Hawthorne and Steel bridges. Chief of Staff Betsy Ames, meanwhile, was leading the pack in the 36-mile, 10 bridge ride. Finally, Nick attended and spoke at a fundraising event for the Blanchet House, which is working to raise funds for a new building in downtown's Old Town neighborhood.

Above left: The Hawthorne bridge was full of happy picnickers Saturday morning.

More pictures in our Photo Gallery!