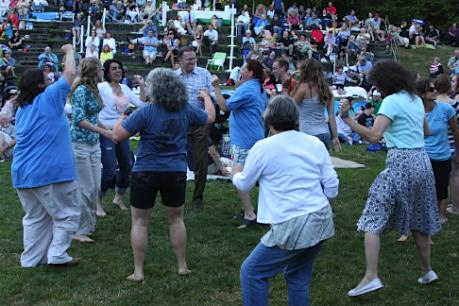 The Washington Park Summer Festival runs through this Saturday. Tonight's show features Loveness Wesa, whose Afro-pop style bridges the past and the present of Southern African music, the Kgotso African Dance group, and the Bantus Band. Tomorrow, the Do Jump! acrobats offer a unique blend of physical theater, dance, acrobatics, and live music from Klezmocracy. The Festival closes Saturday night with Felicidades, a closing night tradition of rousing salsa and calypso.

Record crowds have turned out this season - we hope you'll be able to join us for one of these final shows!

Thanks to Parks' Kyle Moredock for the great action shot!