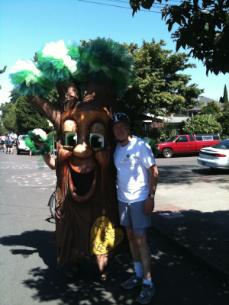 Commissioner Fish participated in the event this weekend and had a blast riding among the crowds. He also took time to catch up with Friends of Trees (and their mascot, pictured left) as well as getting his copy of Mia Birk's Joyride signed at her book release party.

The NEXT Sunday Parkways event will be Saturday, September 26th and will feature the Northwest neighborhood. For more information about Sunday Parkways and volunteer opportunities (such as intersection superheros) go to their Facebook Page.