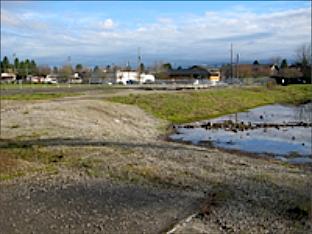 The Gateway district has long been identified as one of Portland's most park-deficient areas. Parks staff have been working to acquire property in the area since 2001. Last December, Portland Parks & Recreation and the Portland Development Commission partnered to purchase just over 4 acres at 106th and Halsey in East Portland.

This summer, Parks staff have worked with the Gateway Neighborhood Park Advisory Committee and with neighbors to develop a plan for the site. In June, Parks held a kick-off and open house to give community members an opportunity to see the site and meet the project team.

This Thursday, September 23, Parks will host a second open house. Join us at the East Portland Community Center from 6:00 to 8:00 to share your feedback on the three project proposals in the mix. We'll also be serving complimentary milk and cookies courtesy of MacTavish Shortbread!

We hope to have a final design by the end of this year. We look forward to bringing a new park to the Gateway neighborhood!