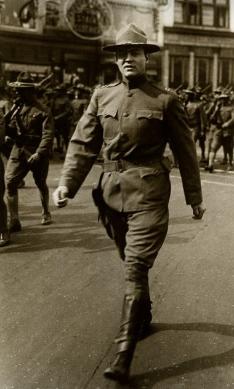 Nick is proud of his grandfather's service as a Captain in the 369th regiment in World War I.

In today's Oregonian, Larry Bingham writes about Sergeant Henry Lincoln Johnson, an African American soldier and hero in World War I, and Nick's desire to right a higtoric wrong.

Because the United States armed forces were segregated during World War I, Sergeant Johnson and the 369th fought in French uniforms, under French command.

For his display of outstanding bravery during battle in France, Sergeant Johnson was awarded the Croix de Guerre, France's highest honor. But he was never officially recognized by the United States in his lifetime.

In 2003, Sergeant Johnson was posthumously honored with the Distinguished Service Cross, but he has not received the Medal of Honor, the Army's hightest honor.

The story of the national effort to honor Sergeant Johnson with the Medal of Honor was first reported locally by The Skanner newspaper, which also interviewed Nick about his connection to the story on camera. Watch the video here.

Left: Captain Fish on Fifth Avenue in New York City after the war