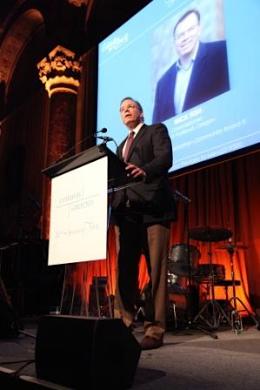 Common Ground, a New York-based organization celebrating its 20th year, is a pioneer in the development of supportive housing and other tools proven to end homelessness. Since its founding in 1990, Common Ground has helped more than 4,000 individuals overcome homelessness. Its three-part approach combining affordable housing, targeted outreach, and prevention has significantly reduced homelessness in New York City.

Nick was very proud to be among the 2010 Honorees.

As a neighborhood leader serving on Manhattan Community Board 5, Nick helped turn around a bankrupt hotel in the heart of Times Square into thriving affordable housing serving theater district workers, residents with AIDS, and formerly homeless individuals.

Now, as Commissioner in charge of the Portland Housing Bureau, Nick is working to help make sure every Portlander has a safe, decent, affordable place to call home.

Congratulations to Commissioner Fish and to this year's Honorees!