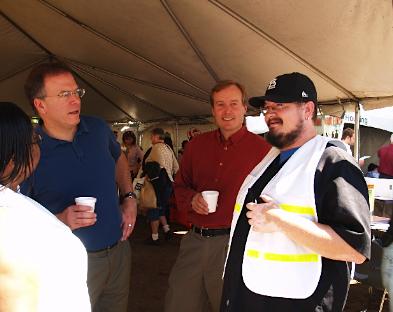 Congratulations to Israel Bayer, Director of Street Roots newspaper, for being named one of four 2010 Skidmore Prize winners. The Skidmore Prize is awarded annually to four people under the age of 36 who do outstanding work at Portland-area non-profits.

Under Israel's leadership, the paper has more than doubled its annual budget since 2007 and prints 10,000 copies of every biweekly issue.

"Everything about poverty and homelessness is gray and convoluted," Israel told WW writer Christina Cooke. "We try to be that stabilizing factor, creating a family-like environment where it doesn't matter where you came from or your past."

Read Israel's letter of thanks, and click here to donate to Street Roots through Willamette Week's 'Give Guide.'

Above: Nick joined Israel and JOIN's Marc Jolin at the 2008 Homeless Connect event in Waterfront Park