This week featured several articles in media both locally and nationwide about the new homeless storage program. In addition to the USA Today story, two more articles were written about the program: 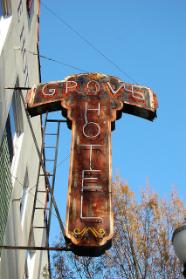