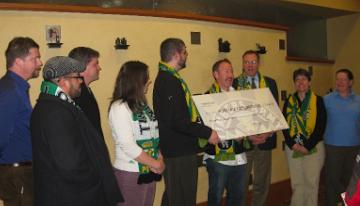 Today, Commissioner Fish and community members working to build 'Harper's Playground' celebrated a generous donation from the Timbers Army. Cody and April Goldberg are the parents of 5-year-old Harper, who is living with Emanuel Syndrome. Cody and April have pledged to raise $200,000 to build "Harper's Playground,' a park designed for kids of all disabilities. The Timbers Army, partnering with the 107ists non-profit, raised over $3,000 for the cause. They presented the Goldbergs with a check this morning in City Hall. The new park will include features like wheelchair ramps, accessible swings, and activities for kids with hearing and visual impairments.