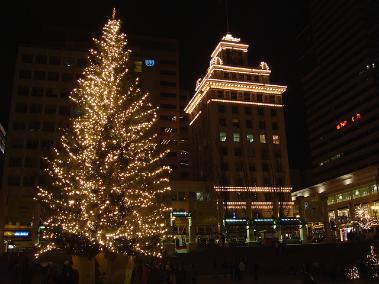 My family and I joined nearly 20,000 Portlanders for the annual tree-lighting ceremony in downtown’s Pioneer Courthouse Square on Friday.

The festive evening included a memorable performance by  Thomas Lauderdale and Pink Martini.

After the event, I learned of the attack planned by OSU student Mohamed Mohamud.

Thanks to the coordinated law enforcement effort that prevented the attack, tens of thousands of people were able to enjoy a festive Portland tradition and celebrate the beginning of the holiday season.

Based on briefings I received from law enforcement officials, Mr. Mohamud acted alone and there is no threat of any further attack.

I want to thank U.S. Attorney Dwight Holton, the FBI, Chief Mike Reese and the Portland Police Bureau for their good work preventing a tragedy in downtown Portland, and for taking extraordinary steps to protect the safety of everyone who attended the holiday tree lighting.

As we condemn Mr. Mohamud’s actions, we must also remember that a troubled young man planned this attack. It was not planned by any nation, or group of citizens, or religion.

Now is not the time to unjustly accuse others for Mr. Mohamud’s alleged crimes.  Rather, we should come together to ensure that similar events do not occur in the future.