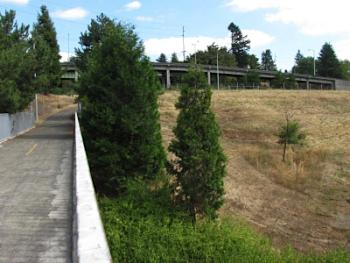 You may have noticed an undeveloped wedge of land between I-84 and I-205. Instead, imagine an oasis of greenery, trails, and recreation activities.

This is the vision of Gateway Green.

Partners from across the region have come together to explore how we can transform this space. The Gateway Green vision creates new off-road biking opportunities, connects to the 40-mile loop system, and brings open space to neighborhoods that need it.

In September, Nick announced that the City would take on a leadership role in the project, including management of the finished park and significant financial support.

Today, Nick is very excited to be part of a milestone event for the Gateway Green project.

He'll join Metro Councilor Rex Burkholder, Bike Gallery owner Jay Graves, ODOT's Jason Tell, County Chair Jeff Cogen, and the two neighborhood leaders who launched the vision, Ted Gilbert and Linda Robinson for a ceremony to mark the end of the Oregon Solutions process with the signing of a Declaration of Cooperation.

More than 20 organizations have statements of commitment in the Declaration. With these commitments in place, and a funding commitment from the City, construction on the project could begin in 2012, and East Portland could welcome a signature new park in 2013.