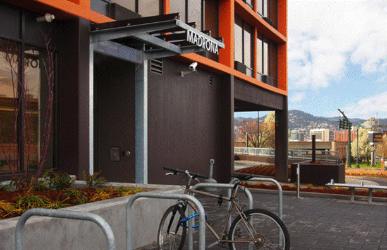 In 2010, CCC started or completed close to $55 million in building projects across Portland. The Portland Housing Bureau (PHB) worked with CCC on one of 2010's notable projects, Madrona Studios (pictured), which provides more than 175 units of affordable housing across from the Rose Quarter.

Those development projects resulted in more than 800 jobs:

The approximately $8.7 million in Urban Renewal Area funds and $6 million from the City of Portland and Multnomah County helped secure more than $40 million in federal and state funding and private financing for CCC projects, Executive Director Ed Blackburn said.

The City is fortunate to have a partner like CCC to help shape our central city landscape through the acquisition and rehab of historic buildings - they help make sure there's a place for everyone in our city's core.

Congratulations to CCC on 2010's impressive accomplishments, and many thanks for helping support our local economy along the way.