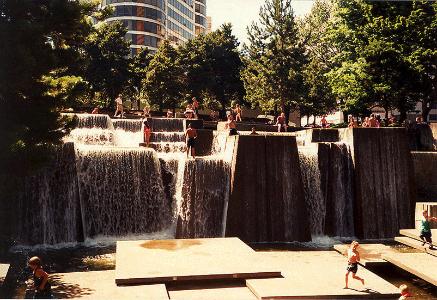 As Commissioner-in-Charge of Portland Parks & Recreation, preserving and protecting our open spaces is a top priority for Nick. Since 1852, Portland residents have planned, created, and treasured our parks, trails, natural areas, and open spaces.

One of Portland's most significant open spaces is the internationally-recognized Halprin Open Space Sequence, made up of three interconnected urban spaces - Ira Keller Fountain, Lovejoy Plaza, and Pettygrove Park.

The Halprin Open Space Sequence is the vision of Lawrence Halprin, the 'tribal elder' of landscape architecture. In 1970, New York Times architecture critic Ada Louise Huxtable called the sequence "one of the most important urban spaces since the Renaissance."

Nick was honored to be part of the 2009 celebration of the life and work of Mr. Halprin, which included the debut of Randy Gragg's "Where the Revolution Began: Lawrence and Anna Halprin and the Reinvention of Public Space."

Today, Nick is working with the non-profit Halprin Landscape Conservancy to make sure we're properly honoring the legacy and the vision of Lawrence Halprin. He's building a partnership between the HLC and the City of Portland to restore and maintain the plazas, and leading the effort to designate the Open Space Sequence a National Historic Landscape, to ensure the lasting legacy of the sequence for generations to come.

More on Lawrence Halprin, the HLC, and the Open Space Sequence