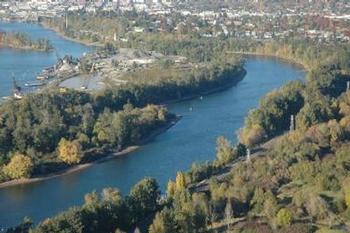 The Holgate Channel is a regionally-important ecological resource. It connects the 160-acre Oaks Bottom Wildlife Refuge and the Ross Island archipelago and offers quiet and safe respite for canoers, kayakers, and rowers.

The shoreline on both sides of the Channel is especially vulnerable to erosion from fast-moving boats.

Last week, the Oregon State Marine Board voted to establish a no-wake zone in the southern part of the Holgate Channel.

We've joined with community partners from the Urban Greenspaces Institute, Willamette Riverkeeper, and the Audubon Society of Portland in their effort to preserve this incredibly important section of the Willamette.

In the Spring of 2009 we were proud to bring forward a resolution in support of a no-wake zone in Holgate Channel and the Ross Island Lagoon. The Council unanimously voted in favor of the resolution. We're glad the Marine Board recognizes the importance of this habitat as well.

Thanks to Mike Houck for the beautiful photo of the Holgate Channel, on the east side of Ross Island