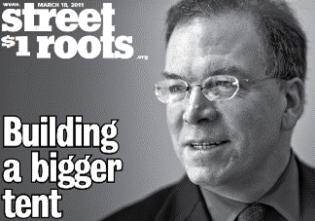 Earlier this month, Commissioner Nick Fish led a delegation of non-profit leaders, business representatives, and City and County staff to Seattle. The group toured project sites, met with Seattle housing leaders, and brought back a wealth of new knowledge around best practices in affordable housing.

Bayer interviewed the Commissioner for the story, asking questions about the creation of the new Portland Housing Bureau, funding challenges in a depressed economy, state-level legislative priorities, and how to build on recent successes to continue delivering first-rate services to Portlanders.

The Commissioner's top priority? Strengthening partnerships. "We have spent too much time in the past fighting with potential allies instead of looking for common ground," he told Bayer. "To drive housing policy locally, and in Oregon, we have to build a bigger tent."