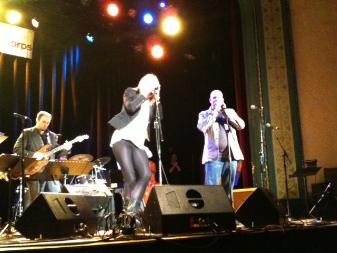 Last night, our community came together and raised $250,000 to support the people of Japan.

It was a community effort to make the concert happen - special thanks are due to Sho and Loen Dozono, Stephen Beaudoin, Aladdin Theater General Manager Tom Sessa, and Mercy Corps staff, who organized the show. Thanks also to the many businesses that donated time and goods to support the effort.

Nick attended the concert and came back with a glowing reviews. Congratulations to all who helped make it happen.

Helping hands in a helpless moment

Thanks to Nick Fish for the photo of Storm Large and Stephen Beaudoin from Sunday's concert!