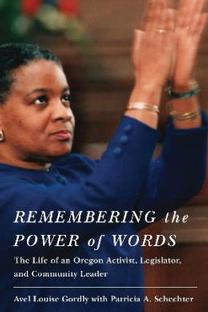 We hope you saw the Willamette Week cover article, "The Truth Has Set Her Free," today.

The piece, about Avel Gordly's recently-released memoir, "Remembering the Power of Words," includes a series of excerpts from the book, an interview with Avel, and a number of great photographs from throughout her life.

This coming Monday, April 4, Avel and co-author Patricia Schechter, a Professor at Portland State University will be at Powell's to sign copies of the memoir and discuss the book.

"As the first African-American woman elected to the Oregon Senate," Henry Stern writes, "Avel Gordly has a unique perspective on politics in a state that's only had eight African-Americans serve in the Legislature during its 152-year history."

Monday, Gordly and Schechter were featured by PSU's Center for Women Politics & Policy as part of its Abigail Scott Duniway Speaker Series, and they will also be at the Vancouver Avenue Baptist Church for its 60th anniversary celebration on April 17.