Last year, Habitat for Humanity completed its 1,000th home in Oregon. It was also named one of the 100 Best Nonprofits to work for by Oregon Business Magazine.

Habitat's "build it and buy it" system requires families to complete a homebuyer education program and to put in 500 'sweat equity' hours, and in exchange offers the chance for very low-income families to purchase a home with a 0% 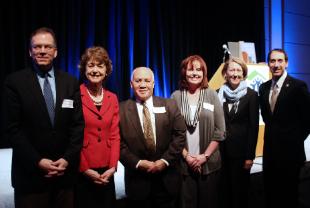 mortgage. Thanks to volunteer labor and donations, families purchase their homes at cost - allowing them to save money for their future, give their families a stable home, and put money back into our local tax base.

We're very proud to support Habitat's work in our community - since 2008, the Portland Housing Bureau has invested over a million dollars in Habitat to help bring new affordable homes to Portland families.

Nick was particularly impressed by "Building Futures," a video produced by our local Habitat for Humanity team (above.)