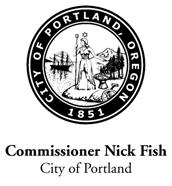 Via email and hard copy

I read in the paper today your concerns about enforcement of fair housing laws in Portland.

22 years ago, Congress passed the Fair Housing Act Amendments of 1988. It put teeth into the law, extended protections to people with disabilities and families with children, and signaled a renewed commitment to ending discrimination in housing.

My father, former Republican Congressman Hamilton Fish, Jr., was the principal sponsor of the Amendments in the House. Inspired by my father's service, I have spent my life working on issues of social justice.

Sadly, in spite of the progress we have made as a nation, discrimination is still a fact of life for too many people in our community.

That's why as Housing Commissioner, I commissioned the first-ever fair housing audit for the City of Portland. We released the audit findings two months ago.

The results were shocking.

We found discrimination in 64% of the 50 tests conducted across the city. Prospective minority renters were quoted higher move-in costs or asked to provide much more proof of income than their white counterparts.

Last week, I announced that Portland would pursue a dual track to combat discrimination in housing: enforcement of the law coupled with beefed-up education and outreach to renters and landlords.

In the weeks ahead, I will announce an action plan, developed with key community and government partners, to combat bias in rental housing.

Our approach will be bold.

I deeply respect that your passion for fair housing arises from your life experience in Portland. Your counsel and support would be invaluable as we move forward.

Working together, across party lines, we can continue to make progress toward our shared goal of equal opportunity for all.