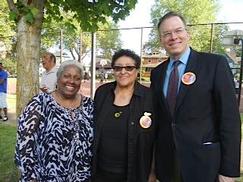 Nick was pleased to speak at the rededication of Unthank Park in North Portland last Friday.

He joined staff from Portland Parks & Recreation, the Police Bureau, and the Youth Violence Prevention Office for hot dogs, a dance performance from the  Self Enhancement High School dancers, and reflection on the life of an important figure from Portland's past - Dr. DeNorval Unthank.

Dr. Unthank, writes Rebecca Koffman in The Oregonian, was Portland's only African-American medical doctor until the 1940s - we learned on Friday that he delivered State Senator Avel Gordly. 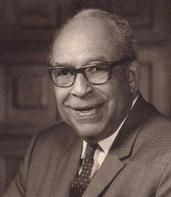 He was also a passionate civil rights activist. In 1969, the City named Unthank Park in honor of his work to dismantle racial barriers in Portland. During his lifetime he was also recognized with awards from the Oregon Medical Society, the NAACP, the University of Oregon, Concordia College, and others.

As part of the citywide effort to keep our parks and public spaces safe this summer, we're expanding our Summer Playground Program roster to include parks like Unthank. Friday's event also marked the kick-off of Unthank's Playground Program schedule, which begins this Wednesday, the 22nd.