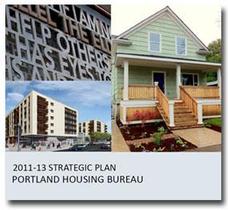 More than a year ago, the team at the Portland Housing Bureau began work on a strategic planning process. Against a backdrop of diminishing resources and growing demand for affordable housing, the team needed to chart a bold new course for the bureau. The goal: increased effectiveness and accountability for the way we invest public dollars in housing.

After putting together data on trends, needs, and program outcomes as well as community input provided by focus groups, surveys, and a community forum, we're very proud to present the bureau's Strategic Plan. The Plan provides an outcome-driven framework to guide PHB's work and investments over the next three years. 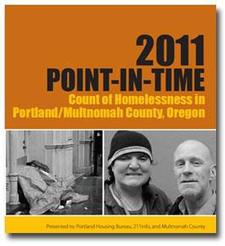 Despite the prolonged recession and double-digit unemployment, the number of people experiencing homelessness in Multnomah County increased only slightly between 2009 and 2011, according to a 2011 'point-in-time' count of individuals and families.

PHB, Multnomah County, and more than 200 community partners worked together to produce the 2011 Point-in-Time Count of Homelessness, a comprehensive report that puts numbers around the picture of homelessness in our community.

"Homelessness on the rise in Portland"

"The Homeless Count Is In. And It's Not Lookin' Good."