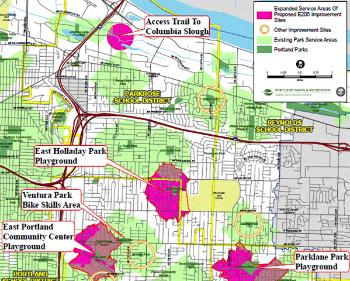 East Portland is a thriving, growing area of town, home to 40% of Portland families with children. It's also relatively young, which means that it doesn't have the history of investment that other parts of town do, writes Jennifer Anderson in today's Tribune.

Especially in terms of parks and park amenities, we know that East Portland is underserved. Three-quarters of Portlanders can walk to a park in 15 minutes, but many in East Portland can't. We're working to change that.

Over the last 20 years, Portland Parks & Recreation has spent more on land acquisition in East Portland than in the rest of Portland combined.

While we don't have the funding to fully develop those properties, we know that small changes can make a big difference. Those small changes are the focus of our E205 Initiative, which leverages public investment with private donations to bring small but meaningful improvements to a number of sites in East Portland. Anderson mentions Ed Benedict Park, Lynchwood Park, East Holladay Park, and Parklane Park, and there are more in the pipeline. (We'll be making improvements to a dozen parks over the next 18 months!)

Parks make our community healthier; they bring neighbors together, provide space for quiet relaxation, and encourage healthy outdoor recreation. Every Portlander should have access to a beautiful park.