Congratulations to the parents, teachers, coaches, and neighbors partnering on the 'Just a Field' campaign to replace a grass field that's in pretty poor shape with a new turf facility at Chapman Elementary in Northwest Portland. In just three months, the group raised more than its goal of $250,000 for the project, and yesterday broke ground on a new turf field. 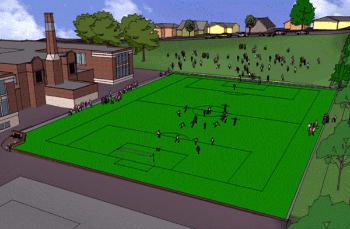 Today, the field is problematic for Chapman students and the community. Thanks to frequent rain, the field is often unusable, pushing recess indoors and forcing community soccer teams to cancel games.

The Steve Brand field - named for teacher Steve Brand, who passed away late last year - will provide year-round access to a high-quality soccer field, for both students and the community.

In partnership with Portland Parks & Recreation, the Timbers have committed to donating $50,000 a year over the next four years to support field projects in the Portland area. This year, the Timbers fund has also supported projects at Concordia University and James John Elementary. Last year, the Parkrose School District received $50,000 for a new athletic facility - project partners, including Commissioner Fish, celebrated the project's groundbreaking in late June of this year.

Video from the groundbreaking celebration

Molly Hottle in the Oregonian