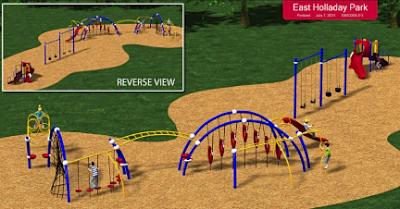 East Holladay Park, at NE 130th and Holladay, will soon be home to this great new play area.

This is the first of several new playgrounds we're bringing to East Portland as part of our E205 Initiative.

Incorporated into the city more recently than other parts of town, East Portland doesn't have the rich tradition of parks and recreational spaces other neighborhoods do.

With 40% of families with children living in East Portland, though, quality parks and open spaces are in high demand.

While we don't currently have funding to fully develop the many properties we've acquired in East Portland over the past several decades, we know that small improvements can have big impacts in neighborhood parks.

And there's plenty we can do now. We're focusing on improvements like new paths, community gardens, playgrounds, and seating - projects that require little or no permitting and can be completed quickly.

By leveraging City dollars with private investment, we hope to bring improvements to a dozen parks over the next 18 months. We're still finalizing our list of sites, and we'd love to hear your thoughts. Click here to comment on our list of potential projects.