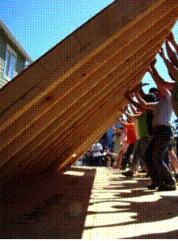 Habitat for Humanity builds and then sells homes to hardworking people in need of decent, affordable housing in the Metro area. In the past 30 years, Habitat has provided more than 200 families with an opportunity to become homeowners. Supporting homeownership for low-income households is a top priority for the Portland Housing Bureau, and Habitat is an invaluable partner in this effort.

Habitat recently announced the launch of a capital campaign, "A World Of Hope: It Starts At Home" to raise $12 million and increase the agency's capacity by 50%. What does that mean? 30 new, affordable homes in the Portland metro area each year, and 30 new families with a home to call their own.

We hope you'll support their effort.