We'd like to share an exciting announcement about the effort to secure a posthumous Medal of Honor for WWI hero Sergeant Henry Lincoln Johnson: Yesterday, Oregon Senators Jeff Merkley and Ron Wyden submitted a letter to Leon Panetta, Secretary of Defense, urging him to reconsider the Medal of Honor for Sgt. Johnson, who served in the 369th Infantry. 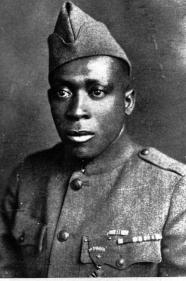 We're proud to be part of this important effort. Nick's grandfather served as a Captain in the 369th, which fought in French uniforms and under French command because the United States armed forces remained segregated, during WWI (read Larry Bingham's great story from last Fall.) In their letter, Senators Wyden and Merkley graciously credit Commissioner Fish with bringing the issue to their attention.

"In 2003 after a herculean effort by his family, friends, and supporters, Sergeant Johnson was awarded with the Distinguished Service Cross. Yet these awards do not properly recognize Sergeant Johnson's heroism. With the new evidence that has been uncovered, it is now possible for our nation to at last give Sergeant Johnson the recognition he deserves: the Medal of Honor."

"Wyden, Merkley seek Medal of Honor for soldier's actions in WWI" - Mike Francis in The Oregonian