At a time when almost half of Oregon renters are "cost-burdened," spending 30% or more of their income on housing, programs to make sure our affordable housing stays that way are more important than ever. 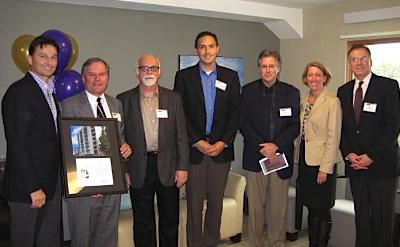 We're very proud of the Portland Housing Bureau's '11x13' campaign to preserve affordable housing in our community. It's innovative, it's effective, and it's garnered national attention.

Today, the US Department of Housing and Urban Development posted "Re-Up," a great story about the program, on its blog "The HUDdle."

The story uses Uptown Tower, which offered affordable rents thanks to a contract with HUD, as an example.

Uptown’s contract was set to expire in 2013, and it was expected that the owner would convert the units to condos and charge more than its current tenants could afford.

Fortunately, the story reports, “the City wasn't caught short. Under the leadership of City Commissioner Nick Fish, it had launched the '11x13' initiative to try to preserve project-based subsidies in 11 privately-owned complexes before their contracts with HUD expired in 2013. They'd already done so in five buildings. Uptown Tower was next on their list."

The team at PHB helped Guardian Management, the property owner, secure financing to purchase and renovate the building. They also helped Guardian re-up the federal subsidy that keeps rents down at buildings like Uptown, ensuring that Uptown's apartments will stay affordable for at the next 20 years at least.

"Bob Joyce, a retired clinical psychologist who'll soon turn 70, calls UptownTowerhome. 'Getting into here,' he told Anne Saker of The Oregonian, 'was a real improvement for me. I had my first full night's sleep when I moved in.' Now that affordability is guaranteed until 2033, may Mr. Joyce and his fellowUptownTower residents enjoy many, many more."

So far, the '11x13' campaign has guaranteed a generation of affordability for more than 500 apartments inPortland, and there are over 400 more in the pipeline. We're very proud of the preservation team at PHB, and are looking to more successes in the coming year!

Photo: Commissioner Fish with project partners at the grand re-opening of Uptown earlier this month