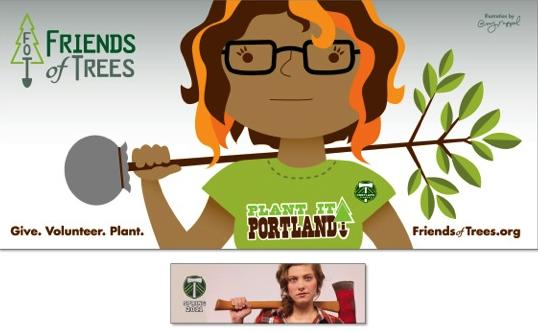 Many of us enjoyed the Timbers billboards that popped up around town earlier this year.

As an avid soccer fan, Nick loves the character that these billboards bring to our city and is very proud of the Timbers' successes this year.

This month, Friends of Trees (see the story below about their great work!) debuted a fun new billboard campaign that playfully mimics the portraits of diehard Timbers fans.

The two Friends of Trees billboards feature illustrated Portland Timbers fans, but instead of axes, they’re wielding saplings and spades. The messaging is simple – Friends of Trees: Give. Volunteer. Plant.

The upcoming MLS season will mark the second of a three-year “Score a Goal, Plant a Tree” partnership between FOT and the Timbers. For every goal the team scores at home, they plant a tree in our community.

We love this creative partnership to increase our urban canopy and beautify our neighborhoods!