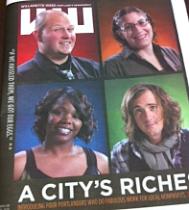 It's that time of year again!

Named for 19th-century Portland businessman Stephen Skidmore, whose generous donation funded downtown's Skidmore Fountain, the prize honors our past while looking ahead to a new generation of leadership. It comes with a monetary prize and certificate recognizing the winner's outstanding contributions to Portland. Read more about the prize and this year's winners: "A City's Riches"

(As always, it's not too early to think about nominating an oustanding community leader for next year!)

In 2009, Nick was honored to present Skidmore awards to Amy Sacks, Fowzia Abdulle, Brandi Tuck, and Jennifer Gilmore. We're so glad this annual tradition exists - every year, the Skidmore Prize introduces us to a new group of amazing people doing good work in Portland.