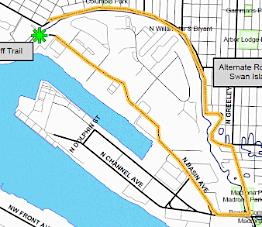 Nick was excited to join community partners and friends for the Waud Bluff Trail construction kickoff this Tuesday. After many years of working through engineering and property ownership details, it's great to take such a significant step forward.

The trail will connect Swan Island, the Willamette river, and the future North Portland Greenway Trail, offering commuters and other trail users 1,700 feet of trail with improved grading and a paved surface. New retaining walls will help stabilize the trail on the steep bluff, and a new bridge will allow users safer access over the Union Pacific railroad tracks.

As part of the project, we'll also add native plants, install new cement at the trailhead on Willamette Boulevard, and create a new pedestrian island and crosswalk on Willamette to address longstanding safety concerns about access to both the trial and a TriMet bus stop.

The City's Bureau of Environmental Services, the Oregon Department of Transportation, the Federal Highway Administration, and several other grant sources provided funding for the project.