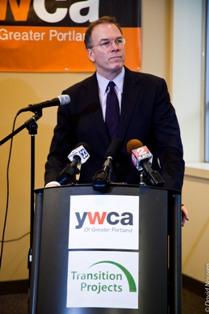 At a press conference Tuesday morning, Nick joined YWCA advisory board member Jennifer Kelly to announce the opening of the YWCA's expanded shelter space for homeless women during the coming winter months.

Each winter, we work with community partners to increase our shelter capacity so that our most vulnerable have a warm and safe place to escape the weather. In addition to the YWCA, there are numerous sites around the city - click here for a full list.

The YWCA shelter, which opened on the 15th, offers 70 beds for homeless women in addition to its 114 year-round spaces. It also provides connections to community services that can help women transition into stable housing.

The shelter is operated by Transition Projects, Inc., which also runs the shelter space and day center services at Bud Clark Commons, which opened next to Union Station this past June.

Like our other winter shelters, the YWCA facility will remain open through mid-April.

This is just one of the additional shelters operating during the winter: Nightly shelter sites in Portland