On December 2-4 and 9-11, the public is invited to take a magical ride on Portland’s famous steam locomotives on the annual Holiday Express hosted by the Oregon Rail Heritage Foundation. 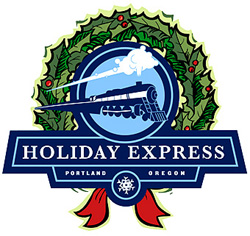 The non-profit organization’s mission is to secure a permanent home for the City of Portland’s steam locomotives, preserve the Brooklyn Roundhouse, and establish a Rail and Industrial Heritage Museum.

The train ride will take you through wilderness in the heart of the city. Roundtrip rides run from Oaks Park Station, through Oaks Bottom Wildlife Refuge, to the Springwater Trail gateway on the Oregon Pacific Railroad.

Santa Claus will also be enjoying the ride on the fully decorated & steam-heated trains!

On October 21, Nick was thrilled to be part of the groundbreaking ceremony of a new, permanent home for three historic steam locomotives owned by Portland Parks & Recreation.

All proceeds go toward funding for the new Engine House and Rail Heritage Center in the OMSI District.

For more info, check out the Holiday Express website.

Steve Beaven in The Oregonian