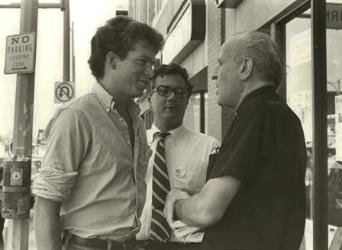 Today, BlueOregon ran a guest column I wrote about my former boss and friend Barney Frank, entitled "Barney Frank: a legacy of principles and pragmatism."

Click here to visit their site, or read the text below.

Congressman Barney Frank's announcement that he would not seek reelection to Congress brought back a flood of memories.

31 years ago, while still in college, I volunteered for his first Congressional campaign. I handled the important stuff – stuffing envelopes, picking up dry cleaning, driving the candidate to events, canvassing neighborhoods, and getting coffee and roast beef sandwiches for the volunteers.

It was a hotly contested primary triggered by the decision of the incumbent, Father Robert Drinan, to step down from Congress in response to a Papal decree. A who's who of Boston politicians considered making the race, including a guy who made his name in the anti-war movement. His name was John Kerry.

Barney won the primary with 52% of the vote, and defeated a retired Army dentist in the general election by a narrow margin.

During the campaign, I was introduced to Barney’s remarkable family.

There was the matriarch – Elsie – an elder advocate and the star of one of his television commercials. His older sister Ann Lewis was a key strategist. She later was a senior advisor for Hillary Clinton's presidential campaign. His younger brother David handled communications. He later served as a speech writer for Secretary of State Warren Christopher. His other sister Doris Breay and her husband rounded out the team.

I made life-long friends during the campaign. They include Barney and his family; Bill Mulrow, who later ran for Comptroller in New York; Peter Kovar, now Assistant Secretary at HUD; Dottie Reichard, leader of the Drinan political team; and many others.

After I graduated from college, Barney offered me a paying job a his legislative assistant in Washington, D.C. With his humor, intelligence, and reasoned defense of liberalism, he inspired me and countless others to see government as a force for good in people’s lives.

When I ran for office in 2008, Barney campaigned for me in Portland. He was wildly overextended, serving as the chair of the Financial Services Committee during the financial meltdown, and helping Hillary Clinton in her Presidential race. But he still found time to host a town hall and raise money for a friend running for Portland City Council.

Barney will be remembered for many things. The first openly gay member of Congress. A crusader for civil rights and marriage equality. Sponsor of Dodd-Frank. A leader in the affordable housing movement.

I will remember him as one of two models for my public service. The first was my father, Hamilton Fish, Jr., a moderate Republican from New York. The second was Barney Frank, a liberal Democrat from Massachusetts.

Both combined strong principles with the pragmatism necessary to get things done. That’s why it never surprised me that they were able to work together on many important issues facing our country.

There will now be a lively debate about Barney’s legacy. For me, it’s simple. 31 years ago a gay person from Massachusetts – even a Congressman – could not serve openly in the military, obtain a top security clearance in the State Department, or get married. All of that has changed.

Barney Frank helped change America, and for that I am grateful.