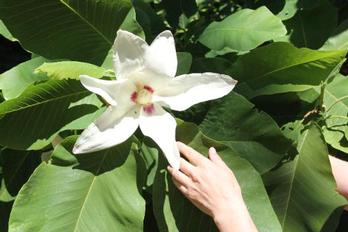 Congratulations to the team at Hoyt Arboretum! Hoyt's magnolia collection has been recognized as  one of only 70 Official Participating Sites in the prestigious North American Plant Collection Consortium (NAPCC.)

This national recognition reflects Portland Parks & Recreation's commitment to high-quality collections. Hoyt's maple collection has been a member of NAPCC for three years now, and its exciting to see the magnolia collection join the club as well.

Says Hoyt Arboretum Curator Martin Nicholson, "This prestigious national recognition gives Hoyt Arboretum access to other gardens actively involved in conservation programs, seed and plant material of threatened species, and the ability to be involved in collections planning to maximize the resources we have available."

During National Forestry Week in 1928, the Forestry Committee of the Chamber of Commerce persuaded Portland's City Council to preserve evergreens  for educational and recreational purposes, and Multnomah County gave the Parks Bureau permanent use of about 145 acres north of Washington Park. It was named for Ralph Warren Hoyt, the County Commissioner who championed the formation of the arboretum. Although the arboretum is relatively young, it has the largest group of distinct species in the U.S. - its plant collection includes 10,000 individual trees and shrubs representing nearly 1,000 species from around the world.

Special thanks to the Friends of Hoyt Arboretum, whose financial support is essential to our stewardship efforts in the park.