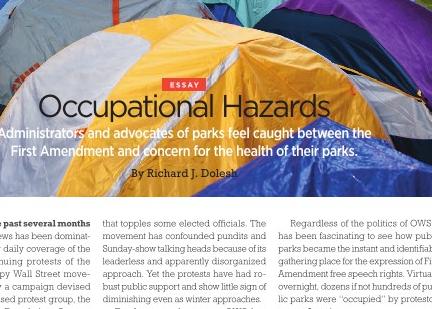 The December issue of "Parks & Recreation," a publication of the National Recreation and Park Association, features an interesting story about the intersection of parks and protest.

In an essay titled "Occupational Hazards," Richard Dolesh writes that it's "been fascinating to see how public parks became the instant and identifiable gathering place for the expression of First Amendment free speech rights. Virtually overnight, dozens if not hundreds of public parks were 'occupied' by protesters across America."

In an inset, Maureen Hannah takes a closer look about our experience in Portland: "Now, even as he and his staff assess the tens of thousands of dollars of damage done to two of those historic city parks, Fish does not dwell on particulars of worn turf, compromised tree roots, and trashed restroom facilities. Instead, he grapples with larger questions about the functions - and limits - of public parks in preserving freedom of speech and assembly."